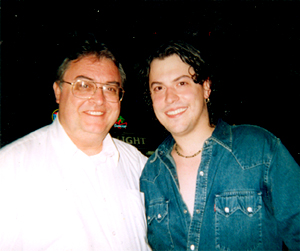 "Wild" Wayne and his son, Brandon

а
"Wild" Wayne is the host & founder of one of the longest running oldies radio shows in the world. . Aired on Sunday evenings from 6pm-8pm Eastern Time on WWUH-91.3FM, he is now in his 41st year playing the music that's "Gone From The Charts, But Not From Our Hearts".

"Wild Wayne" was born & raised in Rockville Connecticut (hometown of Gene Pitney). His first musical remembrance was on a Sunday evening in 1956 when as a young impressionable 8 year old , he watched an exciting new singer appear on the Ed Sullivan show named Elvis Presley.
He distinctly remembers his parents reacting with disgust at the performance but personally was captivated.

As "Wild" Wayne puts it, during the 50's he grew up more of an "absorber" than an "observer". Later on, his interest in the music intensified witnessing the success of hometown favorite Gene Pitney. He was greatly influenced listening to the local radio disc jockeys like Ron Landry, Joey Reynolds etc. He knew then he had the "bug" and that radio was going to be a future part of his life.

In 1965, while in high school, he attended Saturday classes at Dick Robinson's Connecticut School of Broadcasting. He graduated from only their second class ever.

Fast Forward to 1974, "Wild" Wayne was asked to co-host an oldies radio show on WFCS (Central Connecticut State College) with Phil Muisener. The show was quite well received and sometime after the show ended a year later, "Wild" Wayne began the Rock n' Roll Memory Machine on WWUH which now has become one of the top recognized oldies radio shows in the country.

Over the past three and a half decades, he has not only presented a diversified selection of 50's and early 60's music but has entertained his listeners with guests from the era such as Les Paul, Duane Eddy, Bobby Rydell, Sam Nelson (Ricky's son), Hank Ballard, Buffalo Bob, Bobby Vee, Fred Parris (5 Satins), Gene Pitney, Santo & Johnny Farina, Johnny Crawford, Dodd Darin (Bobby's son), Ronnie Spector, Barbara Orbison (Roy's widow),Carl Gardner (Coasters), Pat Holley (Buddy's sister) and a score of others.

In the 70's & early 80's, he was a featured writer with GOLDMINE magazine which led to the publication of GOLDMINE's first book which highlighted interviews with several top performers from the Golden Age of Rock n' Roll.а Many of these interviews have been quoted in subsequent books and album liner notes.

In addition, in the late 1970's, "Wild" Wayne acted as a musical consultant to the group Sha Na Na and their popular television show. To this day he and "Bowzer" (Jon Bauman) remain close friends. "Wild" Wayne has been a contributor to several books written on James Dean, Buddy Holly, Alan Freed and Bobby Darin

For the past 26 years, he has been a voting member in the Rock n' Roll Hall of Fame. In 1986, then Mayor Robert McNulty of East Hartford proclaimed it "Wild Wayne Day" in East Hartford on the observing of the Memory Machine's Tenth Anniversary on Novemver 30th. He was further honored on his 25th anniversary by Governor John Rowland of Connecticut on November 25, 2001 who issued a proclamation proclaiming it "Wild" Wayne Day in the state.

In 2006. the Memory Machine reached it's thirtieth year mark on the air. For this achievement, "Wild" Wayne received numerous accolades including a proclamation from the Connecticut State Legislature and a citation from the United States Congress.There's no sign of slowing down and as "Wild" Wayne puts it, "I've got the silver so now I'm going for the gold!"

He has been happy to share his accomplishments with his wife of 46 years, Irene ; his daughter Heidi and his son Brandon and grandson Hunter. (See link page)

"Wild" Wayne also wishes to thank all of his loyal listeners for their incredible support and loyalty through the years.